God is Back? The subtleties of globalisation and some other random thoughts about the relevance of Christendom 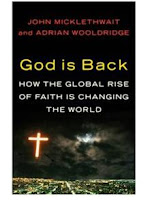 Interesting difference in the subtitle between the US and the UK editions of God is Back:

The story offered by the authors on the future of religious faith is told using an economic model. Sociologists might want to argue about whether the story is really one that could equally be told in sociological terms on the spectrum of establishment versus sectarianism. Interestingly a large part of the same story could be told in terms of church history using the differential historical impact and significance of the Christendom legacy between Europe and North America as the key element.

In assessing the future trajectories of Christianity and Islam the authors might actually have found some strands of theology of interest. I would argue that the Anabaptist tradition of Christianity by its essential logic calls for the implementation of a secular and pluralist political order as every social order must be secularised as part of the critique of idolatry.
Posted by Doug at 8:48 pm