A couple of interesting reflections on the significance and meaning (not?) of Australia Day by Kym at  Larvatus Prodeo and Peter Chambers at  This Blog Harms.

Both reflect on some of the changes to the character of the day and the celebrations over recent years. Kim first:


I think everyone of a certain age can also remember a time when “Australia Day” was pretty much a nothing day. A moveable feast that made a long weekend, where some obscure ceremonies involving firing salutes would take place, and where a few history re-enactors would have their One Day of The Year .... It was, of course, always a day when The Great Forgetting moved into overdrive, and Indigenous people, rightly, sought to remember and remind by renaming it Invasion Day and marching, and being visible.

But it wasn’t a day when people who – in any way – departed from The Great White Australian Male Norm – had to observe bunches of drunks with Australian flags draped over their shoulders marauding about, demanding people kiss said flags, and generally harassing anyone who visibly departed from said Norm. And chanting “Aussie, Aussie, Aussie, Oi, Oi, Oi!”.

But what are we left with? Sermons and worthy speeches about unity. But a strange unity between the Official Symbols (Flag, Governor-General, military flyovers, and so on) and the appropriation of those symbols by a minority of nativists who believe that they “grew here” ... This is not unity. It’s actually disunity wrapping itself in the flag of Nation and unity.

Peter draws attention first of all to the oddness of the day.

Australia Day is an odd selection for a national day. I mean, most nation-states celebrate independence: independence that they fought for, or won, or were given. I suppose this is impossible in Australia, seeing as we effectively refused it when given the opportunity. Nonetheless, the obvious choice is Federation, which was on January 1, 1901. It would be the technically correct choice, since before that, ‘we’ weren’t a nation, just a bunch of self-governing British colonies. But it would also be the hungover choice, given that it’s also New Years Day… in Australia. Scotch that.

But it gets weirder as soon as you ask what Australia Day actually purports to commemorate. I mean, the arrival of a bunch of stinking prison hulks full of transported convicts, mostly men, and their introduction of smallpox to the local Aboriginal populations… Well, it doesn’t seem like our finest moment. Convict origins, shit food, barely potable water, various types of pox, no toothpaste, insufficient opportunities for conjugal bliss… it seems like an experience that most peoples would prefer to forget.

Then he puts his finger I something that I had been partly conscious of but not got round to fully articulating - the extent to which national identity is now being expressed as consumerism, identity without history and detached from memory. this shifting to a consumerist focus has happened increasingly over the past decade, but has been really noticeable during the past two or three years.

This is a picture of an Australia Day merchandise stall at a Woolworths.

No doubt you’ve seen it at yours, if you’re a shopper (and how could you not be, if you’re Australian). When I look at this rack, I see nude capitalism: the emptying out of everything. Rack upon rack of cheap, tacky, Swanston St-quality merchandise, whose only uniting factor is the flag (on which, weirdly, the flag of the colonist still looms large). Check just around the corner at bigger stores, Woolies are also pimping be-flagged boogieboards. Ten years ago, Australians would have laughed at gullible tourists for buying this crap… now, judging from what I’ve seen on the Mornington Peninsula and at the tennis, we’re lapping it up. ... Australia Day has become something irredeemable, full to the hat brim with its own emptiness. But, as I see it, there’s a way through this. It’s the difference between celebration and remembrance.

All this before the actual media event of the Prime Minister and tony Abbott retreating for the Lobby Restaurant and the protest by people attending the 40th anniversary of the Aboriginal Tent Embassy at the comments by Tony Abbott. The two episodes were overlapping, but not identical, but that's to the issue here. What the overlapping episodes showed was that political leadership in Australia has no sense of the importance of truthful remembering about this nation's morally complex history.


Christian "remembering" on Australia Day is going to be even more complex because what we are remembering here involves placing the story of church here in the context of its identity as a pilgrim people, that cannot own the claims of our nation as final and determinative of who we are but place ourselves in a longer and broader story. The Epistle to Diognetus reminds us of some of the tensions of this location for the task of remembering:

Christians are not distinguished from the rest of humanity by country, language, or custom. For nowhere do they live in cities of their own, nor do they speak some unusual dialect, nor do they practice an eccentric lifestyle....While they live in both Greek and barbarian cities, as each one's lot was cast, and follow the local customs in dress and food and other aspects of life, at the same time they demonstrate the remarkable and admittedly unusual character of their own citizenship.


"They live in their own countries, but only as aliens; they participate in everything as citizens, and endure everything as foreigners. Every foreign country is their fatherland, and every fatherland is foreign.

I am continuing to meditatively read Nicolas Lash's beautifully written lectures, Holiness, Speech and Silence: Reflections on the Question of God. Much of what he has to say on 'religion' turns on its head most of the commonly held assumptions in contemporary discourse about the meaning of the term.


Most religion is, of course, idolatrous. We ascribe divinity to, we treat as sacred, a vast diversity of ideas and institutions, peoples, place stories, customs, which are, at worst, destructive of ourselves and of the world in which we live, and, at best, ambivalent intimations of where true holiness, beyond all our construction and imagination might be found.

Thus it is that the great religious traditions of this world function as schools in which people learn that there is no feature of the world - no nation, institution, text, idea, ambition - that is, quite simply, sacred. To be a pupil in these schools (and all the teachers in these schools are pupils too) is to learn that we are called beyond the worship of the creature; to learn that that alone is truly 'holy', is quite beyond location and imagination, radically transcends the secular in which we live and die, bearing the gift and burden of contingent freedom. It is within the world, in all the world, in all we think and do and say and see, achieve and suffer, and by no means only in some small margin of the world which people, these days, call 'religion', that we are required to be attentive to the promptings of the Spirit, responsive to the breath of God. (39-40)

Nicholas Lash has an excellent account of what doing theology means today in his series of lecture  Holiness, Speech and Silence: Reflections on the Question of God.


... continuing to hold the Gospel's truth makes much more serious and dangerous demands than mere lip-service paid to undigested information. Unless we make the truth our own through prayer, thought and argument - through prayer and study and an unflinching quest for understanding - it will be chipped away, reshaped, eroded by the power of an imagining fed by other springs, tuned to quite different stories. And this unceasing, strenuous, vulnerable attempt to make sone Christian sense of things, not just in what we say, but in the ways in which we 'see' the world, is what is known as doing theology. (4)

For a helpful unpacking of some of the themes in this fine piece of theology, see Simon Barrow's paper What Difference does God make today?
Posted by Doug at 10:12 am No comments:

I was struck by a news item on the ABC this morning. It was based around the substantial increase of Iranian refugees getting to Australia through Indonesia. The percentage of refugees from Iran has increased over the past two years from 6% to 50%.

This is a really significant shift. So what is the Australian Government doing? The are going to talk to the Indonesian Government about trying to cut off the channel for Iranians getting to Indonesia from Dubai.

Wouldn't this prima facie evidence of increased persecution of dissent and minorities be an issue that might be of concern to Australians?

Apparently not - not is all about us and refugees reaching us - not issues of human rights and the possible impacts of US policy. 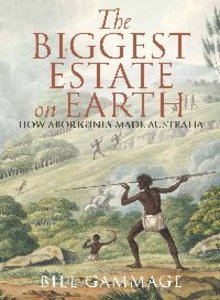 Bill Gammage, in The Biggest Estate on Earth: How Aborigines Made Australia, fundamentally challenges the traditional account of the character of the Australian landscape and the role of the Aboriginal people in creating that landscape. He quotes the account of Charles Darwin during his visit to Australia in the 19th century: ''Harmless savages wandering about without knowing where they shall sleep at night and gaining their livelihood by hunting in the woods.''


Darwin, along with most of the European invaders, got the story wrong,Gammage reckons, though they provided much of the evidence on which he build his case for that fundamental misapprehension.


Gammage's book is a big, beautifully presented, intellectual detective story. It is rare to be able to praise a book for both presentation and content, but this is one of those occasions on which I am free to do both. No effort has been spared in the presentation of the argument, with around 35 pages of reproductions of early paintings, sketches of geographical areas and their vegetation and current, comparative colour photos. He makes the case that the Aborigines not only adapted to the Australian environment but that in significant ways they created it and that this creation underlay a lifestyle that was relatively free, independent and provided substantial time for cultural, religious and social activities.


In making his case for a continent wide consistent pattern of using fire to create a landscape that provided sufficient, sustainable sources of food, Gammage draws heavily on paintings and sketches from the early settlers shortly after invasion when the pre-1788 regime of management was still in place and the situation following the forced abandonment of that regime in a wide range of contexts across the country, along with extracts from diaries and correspondence.


Much as Henry Reynolds forced a revision of the contemporary wisdom on the issue of the Aboriginal response to the European invasion, Gammage has laid the basis for a revolution in the understanding of Aboriginal management of the environment pre-1788. He  concludes his argument with the following observations:


This book interrupts Law and country at the moment when terra nullius came, and an ancient philosophy was destroyed by the completely unexpected, an invasion of new people and ideas. A majestic achievement ended.. Only fragments remain. For the people of 1788 the loss was stupefying. Australia, of how to be Australian, vanished with barely a whisper of regret.
We have a continent to learn. If we are to survive, let alone feel at home, we must begin to understand our country. If we succeed, one day we might learn to be Australians. (p.323)