Mortality of the nation state and the risks of nuclear proliferation

Don't get me wrong - I strongly in favour of action to prevent the proliferation of nuclear weapons. I have often, however, reflected on the hypocrisy of those states with nuclear weapons acting occasionally, vigorously, to restrict their spread.

"You can trust us" is the implication, we are not crazy like those other states for whom possession of these weapons might prove a risk. "You can't let states that might have crazy leaders get hold of them". "We are rational democratic states, we don't get crazy people in charge, who might start waving them around".

Leaving aside that the logic  of deterrence involves creating the impression that you might be crazy enough to actually use nuclear weapons, their is another critical assumption in the rationale that rarely gets unpacked. Lee Griffith in The War against Terrorism and the Terror of God (Eerdmans, 2002) nails it nicely.


There are no Reichs to last a thousand years, no empires on which the sun  will never set. Like the Soviet Union, like Rome, like Babylon, the United States will surely pass away. Like treasures, nations are consumed by moth and rust (Matthew 6: 19). The life span of nations is much shorter than the half life of most nuclear materials. A failure to acknowledge that the weapons we disperse, and the weapons we possess, will someday be possessed by other hands is simply hubris. (p.82)

The reality of the Holocaust and the value of human life

Watching from a distance the implosion this week of The News of the World has had the awful appeal of watching a disaster in slow motion. You can see it coming, you know you really have better things to do with your life but the appalling inevitability of events calls for your attention with a degree of hypnotic power. 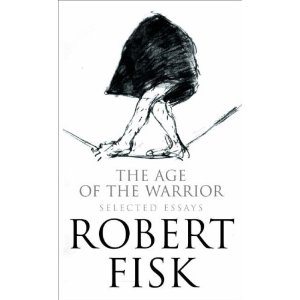 The entire shenanigans certainly won't do much for the not terribly public regard for the profession of journalism. It so happened that this week I have been reading a selection of the writings of one of those journalists whose contribution reminds us that there are some who stand out through their moral sensibility and their concern with the way language is used. I refer of course to Robert Fisk, in this case to his collection of columns in The Age of the Warrior: Selected Writings.

There is a also a deep concern throughout Fisk's journalism that human life should be respected and it was a few lines on this issue that caught my attention. In the course of his discussion of the diary of Klemperer's account of the Holocaust he quotes a comment from Khatami a former president of Iran responding to the current President Ahmadinejab who apparently views the holocaust as myth, who observed that "The death of even one Jew is a crime", While this reply starts with the specific issue of the holocaust of Jews it pushes the moral issue beyond that of the ethnic identity of the victims.

Fisk goes on to observe that "Indeed his words symbolised something more crucial: that the importance and the evil of the Holocaust do not depend on the Jewish identity of the victims. The awesome wickedness of the Holocaust lies in the fact that the victims were human beings just like you and me." (p.143)

Yes indeed, and those who have been the victims of other episodes of attempted genocide have their claim on us because they too were human beings, not because of their ethnic identity.
Posted by Doug at 5:25 pm No comments:

The tragedy of asylum seekers and other displaced people

I didn't watch the ABC documentary on the Tampa last night because that issue is one of those guaranteed to make me very angry - I feared it would become "a near occasion for sin".

However I did find myself drawn into watching some of the Q&A afterwards. As I thought about the way the questions and responses went it occurred to me that the lack of clarity about the numbers of people who are refugees and the different categories of refugee enabled us, as Australians debating the issues to avoid facing some important questions.

No matter how large the numbers of those seeking asylum are on a global scale, they are nowhere near the total number of refugees across the globe. Many are displaced people within their own countries. Many more are displaced people outside the land of their origin who want to go home.

The moral issue of how we deal with asylum seekers and refugees who seek to come to Australia is important. No question but we need some perspective here. The number of people coming via boats is in the order of 2-3,000 per annum at the moment. The number who seek asylum after arriving in Australia by air is around 9,000 per annum. The fear and anger in the Australian community over this number of people coming by boats is out of all proportion to the numbers involved - contra Scott Morrison.

Surveys have shown that most members of the Australian community think the numbers involved are much larger, 100 times larger and neither of the major political parties have seen fit to get out their and educate people about the facts. Instead we have appeals to fear and prejudice and blatant attempts to de-humanise the people involved. Why we are so vulnerable on this point is an issue that needs thought and self critical reflection that will take us beyond simply using labels like xenophobia as David Marr did last night.


Beyond that the focusing on the relatively small group of asylum seekers coming by boat enables us to dodge consideration of the reality of the much larger groups of displaced people in the world and our implication as a nation or as consumers in helping create the situation that led to that displacement.

For example, our involvement in the war in Iraq helped fuel a massive displacement of people both within and outside Iraq. Our ongoing involvement in the war in Afghanistan implicates us not only in the creation of Afghan refugees but also in the flow over effects into Pakistan and the displacement of people within that country.

On the economic front some of the immense displacement of people in the Democratic Republic of the Congo and surrounding countries in the Great Lakes region of Africa has been fueled by the push for minerals to sustain our consumption of the goods in which they are incorporated and I won't even go on to discuss the displacement of people in civil warsarising from struyggles for the control of diamonds.

So by all means let us explore thoughtfully the issue of how we are as a nation-state to respond to the claims of the vulnerable and displaced who come seeking asylum. Let us not become so obsessed that we assume that even achieving a relatively just and compassionate policy will exhaust our responsibility towards the displaced people across the globe. We are all deeply implicated in their condition. We are more truly and deeply than we might want to acknowledge our bother's and sister's keepers.
Posted by Doug at 8:37 am No comments:

Messianic Americanism - where did it start? 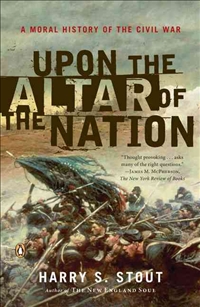 Harry Stout in Upon the Altar of the Nation: A Moral History of the Civil War (Penguin, 2007) set out to under take an assessment of the war using just war criteria. I don't think he succeeds all that well in that particular task, not helped by the fact that he doesn't deal with the complexity and ambiguity of the history of the criteria.

That relative failure may not matter all that much because he has done something that is much more interesting and relevant for Australians. He has presented an interesting argument as to why and how the theological arguments developed on both sides of the conflict to underpin a new sense American messianism that emerged as one result of the war.

Stout's account of the dynamic interaction of the progress of the war with the arguments that were developed by the churches and clergy on both sides to justify their support for their respective governments looks plausible or at least arguable and is underpinned by a wealth of documentary evidence from sermons, printed and unprinted by which he tracks the trajectories of the argument as they developed in response to the ebb and flow of the war.

The Civil War was the crucible of modern US identity. If you want to understand how that sense of nationality acquired its deeply religious, messianic character then a reading of Upon the Altar of the Nation will repay a thoughtful reading.

It also provides a reminder of how much the language of religion has now become taken over by the state to justify its use of violence. The "holy" has well and truly "migrated" as William Cavanaugh has recently reminded us. Indeed I am inclined to argue that Stout's work stands as a helpful case study of that migration in the American context.