Reading bonhoeffer - God is no stopgap

Reading Bonhoeffer I have to remind myself again and again that much of his writing was in the context of a totalitarian regime and that in his writing he is attempting a profound critique of the regime and the way the church was responding without spelling out that specific context, an that for perfectly obvious reasons when you stop and think about it.

Much of his reflections about responsibility, for example, were about the ethical underpinning to his approach to the plot against Hitler. If we forget that we will read his writings as a purely academic discourse separate from the context in which he found himself. To do that is to fundamentally misread him and to miss the full stretch and challenge that he was making to theological and intellectual heritage hat he was brought up in.

And in the end he keeps gong with his refrain of the inextricable worldliness of Christianity.

Remembering the Sermon on the Mount

A friend of mine Dave Andrews has started a project to remind Christians of the Sermon on the Mount - as a central source for Christian activism and discipleship. See his website http://wecan.be/

Getting back into memorising and reflecting on the Sermon brought back to mind Bruce Cockburn's version, that takes the form of one verse in "Shipwrecked at the Stable Door', from the Big Circumstance album. 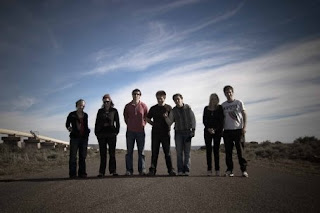 A viewing of the movie "We shall be remembered for this: A film about Australia" last week brought back to me the deep anger that I experienced during the years from 2001, the deceptive language and fearmongering of the previous Government's refugee "policy", and the deaths of the people on the SIEV X.

The simple road movie of a trip to Baxter refugee camp put together by a young Christian activist, now a lawyer, http://wewillberemembered.wordpress.com/about/ provided a helpful benchmark on where we had come from during a week in which there was an announcement of a substantial change in government policy.

A simple story that is worth going back to, to be reminded of how people were de-humanised and put through severe trauma from simply trying to exercise their right to seek asylum.

We need to remember our shared humanity - for Christians the fundamental claim that all share in the image of God, or as the Quakers put it, acknowledge that there is "that of God" in every human.
Posted by Doug at 4:30 pm No comments:

A week for remembering... 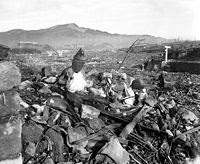 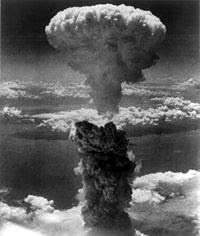 9 August 1945 - Nagasaki was devastated by an atom bomb.
The radius of total destruction was about 1.6 km (1 mile), followed by fires across the northern portion of the city to 3.2 km (2 miles) south of the bomb.

the shadow of nuclear weapons still hangs over us - the nuclear arsenals are not yet being reduced, the vision of the prophet Isaiah of a time when swords will be turned into ploughshares remains unfulfilled, and the Christian churches remain deaf to the call of Jesus, Blessed are the peacemakers for they shall be called the children of God.

We remain caught up in arguments conducted with little charity and verbal violence about our definitions of who should be ruled in and out of the church while the fundamental claims of Jesus' call to discipleship seem to be ignored.

A week too to remember Alexander Solzhenitsyn - A Day in the Life of Ivan Denisovich stands as a powerful account of the struggle to be human in a totalitarian society.
Posted by Doug at 3:57 pm No comments:

On 9 August I want to remember the witness of Franz Jagerstatter, an Austrian peasant who was executed for his refusal to perform military service for the German Reich. His story is an amazing account of the achievement of moral clarity in judgement about the essential character of the Htler regime and a steadfast opposition to the regime based on that assessment.

Jagerstatter's "solitary" witness was not so solitary, though it was not a journey shared by many of his fellow Catcholics. He was sustained by his church, almost despite itself, through its practice of pastoral care and his commitment to the disciplines of his faith, most notably through his reception of communion. The church who formed his “reference group” was the church of the prophets and the martyrs. The delight with which he heard the story of Franz Reinisch, a priest who had previously trodden the same path he was treading, is poignant testimony to his desire to be in communion with the wider church, to not be alone.

Michael Baxter provides us with a theological account of the relationship between the individual and the church in a way that highlights the communal dimension of Jägerstätter’s witness despite its apparent solitary character. 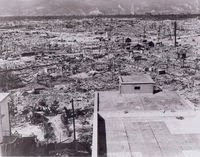 Remembering 6 August 1945, Hiroshima - lest we forget? 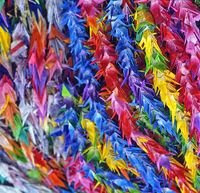 At the end of a discussion of Romans 1 in which James Allison argues that it has nothing to do with what we call homosexuality, draws our attention to the context within which reading is done.

Because for us the prime source of authority is not the text itself but the crucified and living victim alive in our midst, who is the living interpretative presence teaching us how to undo our violent and evil ways of relating to each other, and how together to enter into the way of penitence and peace. For us the phrase 'The Word of God' refers in the first place to a living person, and only by analogy to the texts which bear witness to him. The living hermeneutical presence is more important than that which it is hermeneuting. This is what is meant by Jesus telling the Pharisees in Matthew's Gospel: 'Go and learn what this means, "I desire mercy and not sacrifice"
And: '... If you had known what this means 'I desire mercy and not sacrifice " you would not have condemned the guiltless" (pp.139-140 Undergoing God: dispatches from the scene of a break-in)
Posted by Doug at 8:53 pm No comments:

Link on starting from the place where we are wrong

As promised previously link to the sermon by Jim Barr - MP3 format - The Place where we are wrong - starting engagment with others from a place of confession of where we as a faith community have failed.

http://www.canbap.org/sermons/sermons2008.html
Posted by Doug at 8:49 pm No comments:

Human rights and the Image of God

In a discussion of the "image of God" at the Zadok/Evangelical Alliance conference on Earthy Theology in Melbourne last weekend, Rikki Watts observed that in the ancient world it was understood that what was done to the image was done to the god. As humanity is understood in the Christian tradition to be "in the image of God" every abuse against another human being is an act of treason against God.
Posted by Doug at 8:42 pm No comments: