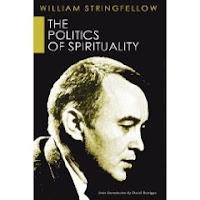 The complete series of William Stringfellow's books, long out of print, is being published by Wipf & Stock. Something timely here. A quarter of a century ago he made the following assessment of the United States in The Politics of Spirituality:

... over dependent upon the consumption ethic, with its doctrines of indiscriminant growth, gross development, greedy exploitation of basic resources, uncritical and often stupid reliance upon technological capabilities, and incredible naivete technological competence and crude relentless manipulation of human beings as consumers. Increasingly now people can glimpse that this is no progress, no enhancement of human life, but wanton ;ounder of creation itself. People begin to apprehend that the penultimate implementation of the American consumption ethic is, bluntly, self consumption. In the process it hs become evident as well that the commerce engendered by the American consumption ethic, together with the commerce of weapons proliferation relates cnsequentially to virtually every injustice of which human beings are victims in this nation and in much of the rest of the world. (pp.64-65)

Reading this a few days ago I thought it was a prophetic reading of the culture that had not dated. The spirituality that drove Stringfellow's assessment of his culture was he thought simply the ordinary experience of the Christian in partaking in politics. Religiosity he argued has little to do with the action of the Word of God in its judgement of human history.

Stringfellow was not overawed by either academics or clerics. He simply sought to exercise his gifts in speaking truth to power wherever it was not being appropriately exercised.
Posted by Doug at 8:33 pm