The subversiveness of the local 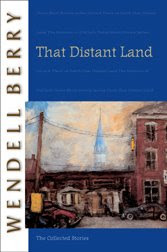 Holidays in the outback means time to do some reading of novels. This year in the Finders Ranges I had Wendell Berry for company - in this case his collection of stories of the town and surrounding countryside of Port William in Kentucky, That Distant Land.

Berry is a wonderful story teller - he loves the land and the people where he lives and brings them to life as characters against the wider social forces that have changed the practice of farming and community life over the past century.

He is a lover of place and the stories celebrate the willingness of people to challenge those wider forces in the name of friendship and out of respect for their relationship to the land on which they work. In the story Fidelity" a dying man is 'recovered' from hospital to enable him to die on his own land with a wonderful episode in which the policeman sent to investigate what has happened finds his assumptions challenged in a wonderful dialogue that subverts our assumptions about the authority of medical institutions and the demands for friendship.

Kentucky might seem a long way from the worn, spare landscapes of Arkaroola and Wilpena Pound but it struck me that Berry's attention to the local and his sense of responsbility for, and connection to the land would place him in sympathy with the Indigenous people who stewarded the limited resources in a demanding environment and recognised their connection to the land.

The achievement of the first people of this land is underlined by the abandoned stone houses across the Willochra Plain north of Quorn. In two waves in the later half of the 19th century the settlers tried to impose European agriculture on an environment that required a sober recognition of limits.

While the recognition of the culture and the founding stories of the first people is recognised across the region, nowhere could I find any acknowledgement of the history ofdispossession and conflict that must have taken place. The silence was deafening.
Posted by Doug at 2:02 pm